MadridThe Feijóo effect has boosted the People's Party (PP). They have gone up almost four points in the polls and would obtain a 27.2% share of the vote, the highest in any poll since the November 2019 elections, according to the latest barometer of the Centre for Sociological Research (CIS) published on Wednesday. The Socialist Party (PSOE), for the first time since November last year, breaks its upward trend and recedes slightly: it stands at 30.3%, one tenth less than a month ago. Thus, the PP is now three points behind the Socialists. "With the current CIS it is impossible to beat the PSOE," said Feijóo, questioning the methods used. In spite of everything, he valued the PP's results positively and added: "Our objective is to beat the PSOE and the CIS".

The growth of the PP translates into a drop for Vox, which, for the first time since September last year, loses almost two points and stands at 14.4%. Unidas Podemos continues its downward trend and loses almost a point: it obtains 10.7%, the lowest figure since July last year. Ciudadanos continues to plummet and the CIS gives it only 2% of the vote (almost one point lower than a month ago). Más País, Íñigo Errejón's party, gains a tenth of a point and obtains 2.1%.

As for Catalan pro-independence parties, all three lose votes. ERC is the one that loses the most ground, down three 0.3 points to 2.4%, while Junts is down 0.1 points and stands at 1.2% and CUP also drops 0.1 and would get 0.9% of the vote.

The survey comes after the Spanish Government approved an emergency plan against the economic crisis derived from the war in Ukraine. At this point, the PP has not yet guaranteed its support for the decree, which must be voted on after Easter, because it demands more tax cuts, such as the personal income tax. The April poll also follows the Moncloa's U-turn in relation to the conflict in the Western Sahara, which it has abandoned, siding with Morocco. This has led to a diplomatic crisis with Algeria and the Polisario Front has broken off relations with Spain.

This poll is also the first since Alberto Núñez Feijóo was officially elected as the new president of the party (at the Seville congress on April 1 and 2) despite the fact that in the previous CIS it was already known that the Galician leader would replace Pablo Casado as head of the PP. In fact, the March survey already asked about Feijóo when it asked which political leader respondents would prefer as President of the Spanish Government. The PP leader obtained 11%, overtaking Yolanda Díaz and placing himself behind Pedro Sánchez. In the last barometers, Casado was behind Sánchez and Díaz: in the February poll, for example, he only obtained 9.5%. This April, Feijóo was already backed by 16% of respondents, while Pedro Sánchez was still ahead with 22%. 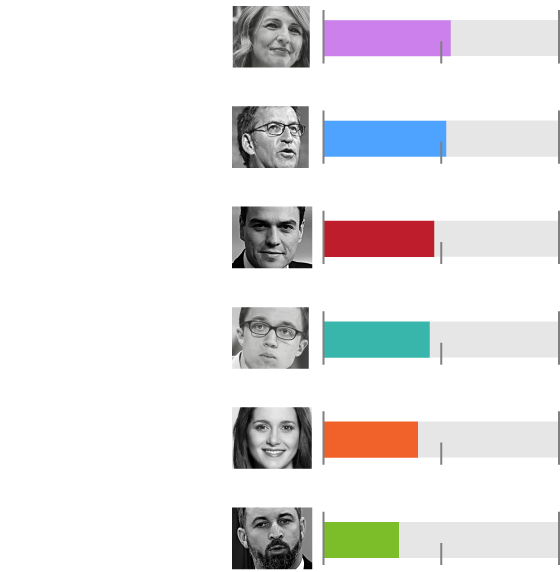 Feijóo is also obtains the second best score. He obtains an average score of 5.20, only behind second vice-president and Minister of Labou, Yolanda Díaz, who passes for a second consecutive time with a score of 5.36. Pedro Sánchez still fails, with a 4.65. Behind come the leader of Más País, Íñigo Errejón, with a 4.54; the president of Ciudadanos, Inés Arrimadas, with a 4, and the leader of Vox, Santiago Abascal, who obtains a 3.16.

Feijóo gets a pass from those surveyed, unlike Pablo Casado, who in the last two surveys, in March and February, had not even managed to reach 4 and had obtained between 3.4 and 3.2 respectively. The degree of trust that voters had in the former leader of the PP was much lower than the one they now claim to have in the Galician leader. Fifty-one percent of those surveyed said that Casado did not inspire any trust in them, while 35.5% say they have little trust in Feijóo, but 30% say he inspires a fair amount of trust.

Robles continues to be the most highly valued minister

The April survey also includes an evaluation of the ministers of the current coalition government. The Minister of Defence, Margarita Robles, continues to be the best rated, with a 5.75. Robles, together with Vice-Presidents Yolanda Díaz and Nadia Calviño, and the Minister of Health, Carolina Darias, are the only ones who pass. The ministers of Podemos, Ione Belarra and Irene Montero, are the worst rated, below 4. Also noteworthy is how little known some ministers are, such as the Minister of Science, Diana Morant, who is only known by 12% of those surveyed, or the Minister of Transport, Raquel Sánchez, by 17%.