The EU report against the project was applauded by environmentalists, but also by parties such as ERC and PSC

MadridThe war in Ukraine has altered many government plans, in particular, those concerned with energy. The fact that Russia, until now the European Union's main gas supplier, is using gas supplies to threaten the EU has caused politicians and institutions to look at projects that had been previously shelved. This is the case of the MidCat gas pipeline, ultimately cancelled in 2019, which was to connect Catalonia and France through the Pyrenees and would be a new way for gas to travel from the Iberian Peninsula to Europe. 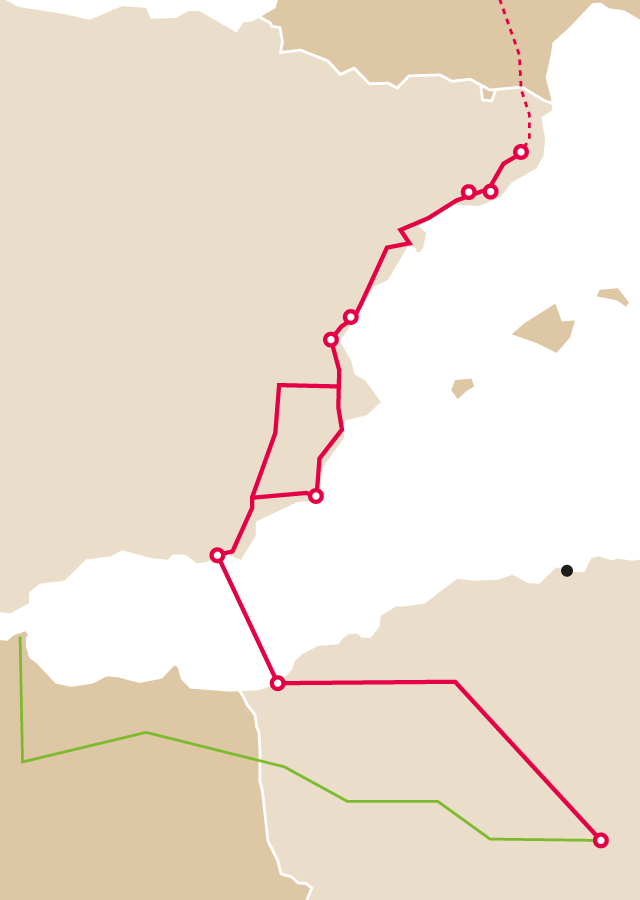 This infrastructure made headlines again in March. As happened years ago, organisations such as Ecologists in Action pointed out that the project has a strong environmental impact and no long-term use. Now, however, part of civil society and, in particular, the Plataforma Resposta al MidCat, created in 2017, has also shown its opposition. This organisation, according to its website, managed to bring together a dozen neighbourhood associations and more than fifty entities from all over Catalonia, in particular from the Baix Montseny area – where for now the pipeline ends – and the Gironès region, but also a good handful of political parties and local councils.

At that time, all of them made it clear that the pipeline did not generate consensus, but rather division. Now, in a very different context, marked by the Russian invasion of Ukraine, some of the political parties that at the time were against the project are now embracing it. Among the Catalan parties, Republican Left of Catalonia (ERC) stands out, which is part of the list of organisations which adhered to the Platform. Republican sources tell ARA that "in the current context" MidCat is a "strategic project for Europe and for Catalonia, also when thinking about the future and the distribution of green hydrogen" and add that they advocate "a respectful project with environmental guarantees". In fact, ERC voted in favour of an amendment presented in May in the Spanish parliament calling for the project to be promoted. So did PDECat – its predecessor Convergència i Unió was never against it – but, on the other hand, Together for Catalonia (JxCat) abstained, even though MP Pilar Calvo defended it in the Spanish lower house. "It is necessary to reactivate MidCat", said Calvo.

En Comú (part of Unidas Podemos) and the Popular Unity Candidacy (CUP) voted against. The two parties, the former through the now defunct Iniciativa, also opposed MidCat back in the day. In this case, however, their position has not changed. Aliança Verda, the environmentalist party within Unidas Podemos, has publicly rejected the construction. "We cannot give in on the path of continuing to move towards the energy transition to go backwards, to an erratic policy of boosting fossil fuels," the party wrote in a statement made public this week.

But this platform has not been the only place Catalan parties have historically use to voice their opinions. In the Girona Provincial Council, in 2018 the CUP presented a motion against MidCat that obtained the approval of ERC and the Catalan Socialists' Party (PSC). The parties acknowledged its "serious environmental impact", but also pointed to the lack of transparency. The Catalan Socialists, now in the Spanish government, have stressed that that vote was a decision limited to the Girona Provincial Council. "The party's position is we are in favour," PSC sources stressed to ARA. "Mr. Aragonès, if it is true that Catalonia stands by Ukraine you should go to the Conference of Presidents and support the MidCat connection", the head of the opposition, Salvador Illa (PSC), told Catalan president Pere Aragonès at the beginning of March. However, Girona Provincial Council was not alone: it was joined by the local councils of Hostalric –which a few months ago again showed its opposition–, Girona, Figueres, Salt and Sils, as well as the Regional Council of La Selva and the Pla de l'Estany.

The opposition has not appeared from thin air. MidCat was finally shelved after the National Commission for Markets and Competition (CNMC) and the French Energy Regulatory Commission (CRE) in 2019 rejected the project as presented. In 2017, however, an independent report by the European Commission commissioned from consulting firm Pöyry already concluded that the infrastructure had a high cost and there were doubts about its profitability. Only some scenarios, such as a reduction in gas pumped by Algeria or very high prices of liquefied natural gas (LNG), could make the project interesting. In fact, the report went so far as to analyse its impact in different "stress situations" such as a "complete cut-off" of supply from Russia during a winter, and concluded that it did not bring any additional benefit.

From euphoria to caution

Lately, it is the Spanish government who has been most optimistic about the pipeline, in addition to businessmen. Spanish PM Pedro Sanchez has said that it would be a "dream" if the project were to become a reality very soon. In fact, when the war broke out, it was his government that revived the debate. However, he set some conditions. Despite the enthusiasm shown lately, the Ministry of Ecological Transition admitted six months ago to ARA that MidCat was "just another piece of the puzzle" and that different elements had to be taken into account: who will pay for it (Spain has always asked for European collaboration); the continuity of the pipe in French territory (France has always been against it), how long the pipeline will remain useful and the capacity to transport other kinds of energy such as green hydrogen. In an appearance in the Senate in 2019, minister Ribera said that she felt "comfortable" with the reports against the pipeline that "underline that it is a ruinous project".

This is the line the Generalitat is following, despite the fact that for the moment it has not made major public statements. On Twitter, Aragonès has expressed the importance of MidCat for the distribution of green hydrogen, while Catalan Foreign Minsiter Victòria Alsina (JxCat) has gone further by claiming that the project was put on hold due to "Spain's and France's great short-sightedness". Now, however, government ranks, especially within KxCat, are being more cautious. "It is neither realistic nor responsible", said Finance minister Jaume Giró, on the possibility of building the project in eight months, as the Spanish government has stated. Nevertheless, ARA has contacted the main area affected, the Department of Agriculture and Ecological Transition, and has not obtained any political or technical response to the project, although they share the president's "line".