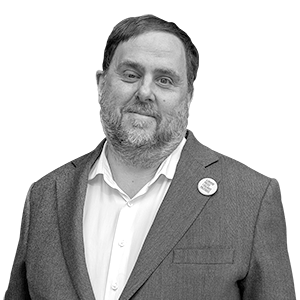 Looking towards the future

A new republican Generalitat begins its path. With the Government headed by Pere Aragonès, we will have, after over 80 years, a president of Esquerra Republicana de Catalunya elected with parliamentary normality. With the same goals that have always moved us: to build a prosperous, just and fully free country for each and every one of the citizens living in Catalonia, whatever they think and wherever they come from. The new republican Generalitat faces immense challenges, but it faces the serious crises we are experiencing with a will to transform, and I am convinced that it will know how to lead the social and economic reconstruction of the country and win the confidence of its citizens by always standing by the people.

And with the new Government a new stage is beginning. More than three years after the referendum of 1 October, we at ERC have reflected deeply on our strengths and weaknesses, our mistakes and our successes, in order to learn from them.

It was clear that the reaction of the State was perceived by a large part of Catalan society as less and less legitimate and far from democratic principles. But, at the same time, we must be aware that our response was not understood as fully legitimate by a significant part of society, including Catalan society. In this sense, I would like to extend my hand once again to all those who may have felt excluded, because our objective must be precisely to build a future that includes everyone.

Our will is the same as always. Independence is the best tool to help the people of this country, but strategies have to be adapted to the circumstances to be successful. The conclusion is there must be more of us; an indisputable, plural and transversal majority that demonstrates that it governs well and for everyone, and that puts the resolution of the existing political conflict by democratic means at the centre of the agenda.

We defend self-determination because we want all the citizens of our country, all of them, to be able to decide whether they want Catalonia to be an independent state in the form of a republic or whether they wish to remain within the Spanish state. And, legitimately, we will work and defend the yes option. We have the right to govern ourselves with the same tools as any state. Three quarters of Catalonia's citizens believe that the solution to the existing political conflict must be resolved by voting, with a referendum. We cannot deny reality; no one can. We cannot act as if these consensuses did not exist; no one can.

We do not want to be part of a state where structures persist that are used to persecute political opponents, where we have to abide by laws that seem to us profoundly unjust and arbitrary, that criminalise behaviours that are fully democratic and should not be criminal. In fact, we have a duty to work tirelessly, by all possible democratic means, to change this situation. And this is what we have done and will do.

And today we continue to believe that the best way to do so, as we have always defended, is the Scottish way. The path of deals and agreements, the path of the agreed referendum. It is the option that generates the most guarantees and immediate international recognition. Because we know that other paths are neither viable nor desirable insofar as, in fact, they distance us from the goal to be achieved.

To become a state it is essential to build a large majority in Catalonia, but we must also earn legitimacy elsewhere. The contest is held within and without Catalonia. That is why we will never renounce dialogue nor negotiation. It would be naïve to believe that political dialogue with the State will bear tangible fruit immediately, but to believe that we can do without it would be highly irresponsible. However much it is criticised and ridiculed, the dialogue and negotiation table between governments is a success in itself because it opens a space for the potential resolution of the conflict.

Dialogue and negotiation are essential. Political conflicts that end up being resolved do so, sooner or later, around a table where all parties freely present their positions. Ours, the one that represents the country's great consensus, is for the end of repression and for self-determination.

We are facing a political conflict and it can only be resolved through political and democratic means. We have always said that it must be returned to the political arena, from which we should never have been made to leave. Now is the time for political audacity, democratic courage and social reconciliation, because the reconciliation of all our citizens is an essential foundation for the future.

For us, and we have explained it many times and we continue to defend it without nuances, amnesty is our priority to put an end to judicial persecution. The issue does not end with exiles or with political prisoners, but it must be extended to the rest of the 3,000 people who are being prosecuted.

Despite this, there are gestures that can lighten the conflict, alleviate the pain of repression and the suffering of Catalan society, and any gesture along the lines of the de-judicialisation of the conflict helps us along this path.

But for this new paradigm to be possible it is important that both parties show their willingness and predisposition. We have been sitting at the table for some time now, despite being in prison deprived of our freedom, and we always keep our hand outstretched. It is time for the Spanish government to show its commitment to reconciliation, dialogue and negotiation, looking towards the future.