Iran: an election with no surprises

Iranian presidential election will take place on June 18. It will be the thirteenth presidential election in Iran since the Iranian revolution of 1979 and the fall of the Pahlavi regime. As with all elections in Iran, potential candidates for the June 18 presidential vote were vetted by the hard-line Guardians Council, whose members are directly and indirectly appointed by Iranian Supreme Leader Ayatollah Ali Khamenei. Out of the 529 people who registered to take part in the upcoming presidential election, only seven candidates were approved by Iran's Guardian Council. Among those barred from running are the former President Mahmoud Ahmadinejad and the former parliament speaker Ali Larijani.

Unsurprisingly, five of the candidates who are running in Iran’s June 18 presidential election are considered as hardliners: Head of the judiciary Ayatollah Ebrahim Raisi; former Supreme National Security Council secretary and nuclear negotiator Saeed Jalili; Expediency Council Secretary Mohsen Rezaei, a former head of the Islamic Revolutionary Guard Corps (IRGC); and MPs Alireza Zakani and Amir-hossein Qazizadeh-Hashemi. The other two candidates present on the list are Abdolnaser Hemmati, a technocrat and the former governor of the Central Bank of Iran, and Mohsen Mehralizadeh, head of Iran’s national sports organisation and former governor of Isfahan.

Ayatollah Ebrahim Raisi, who lost in 2017 to incumbent Hassan Rouhani with almost 16 million votes, is considered as the leading contender, most of the observers and experts of Iranian politics consider that these elections have been carefully engineered and controlled by Supreme Leader Ali Hosseini Khamenei and the Iranian Revolutionary Guards (IRGC) who have been influencing all decision-makings concerning Iranian domestic and foreign policies. Since Ayatollah Khamenei is 82 years old, there are already rumours that the best candidate to replace him in the long run as the Supreme Leader of the Iranian revolution would be Ebrahim Raisi. This is a decision which will certainly be desired and approved by the hardline members of the IRGC and the Basij, who are the most powerful support base for exporting the Islamic revolution to other countries and breaking all resistance from social and political groups in the country.

No hope for reform

Many consider that this election is the final nail in the coffin of the reform movement and the idea supported by many inside and outside Iran during the past three decades that gradual political change in the Islamic Republic is possible. These elections are an important opportunity for Iranian hardliners to win control of the most important branches of government after being out of office for eight years. The reformists even tried to pressure Hassan Khomeini, the grandson of the founder of the Islamic republic, Ayatollah Ruhollah Khomeini, to run as a candidate, but even he had no chance to encounter the dynamic of an election fully controlled by the Supreme Leader and his gathering.

As a result, none of the close collaborators of Hassan Rouhani, including could pass the Guardians Council vetting. But, anyhow, the reformists were blamed to have failed to bring meaningful change in easing political and social restrictions in the country and help the expected rise of the hard-liners. This is one of the main reasons why many Iranians became increasingly disillusioned with the reformist camp of the establishment, which has been increasingly marginalized.

As for the hardline factions, though they have been unified in their support of Ebrahim Raisi, none has succeeded to energize Iran's disaffected public. There seems to be minimal interest in the presidential election among many young and old Iranians who are struggling to make ends meet amid a continually deteriorating economy that has been crushed by U.S. sanctions.

Let us not forget that the presidential election of June 18 follows Iran's February 21, 2020 parliamentary elections which resulted in an increase in the number of hard-liners in the legislature due to a historically low turnout as well the disqualification of thousands of moderate candidates. Also, there are no hopes on the side of the Iranian youth, who is in search for a better economic situation, that the election of June 18 would result in foreign investment and improved ties with the West. But this is not a fact which worries the Iranian hardliners, who already have prepared their full economic, political and military powers over the country. The truth is that with less domestic competition, Iranian hard-liners will have free hands and more confidence to make bold decisions concerning the hegemonic role of Iran in the region.

In the mean time, the Iranian presidential election is taking place with no maverick figure who speaks truth to power and thus can garner support from the largest segment of society, namely disillusioned Iranians. The victory of the sole candidate Raisi is exactly the sort of outcome that Ayatollah Khamenei’s pre-election engineering has aimed at achieving. That is why the June 2021 presidential election, above all, provides us with a glimpse into the post-Khamenei Islamic Republic prepared by the Supreme Leader himself and the Iranian military institutions.

Filòsof, was imprisoned in Iran for his pro-democracy political ideas in 2006 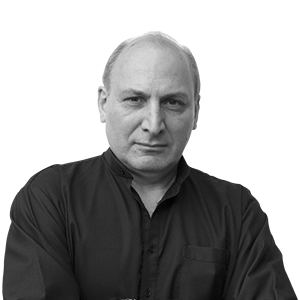