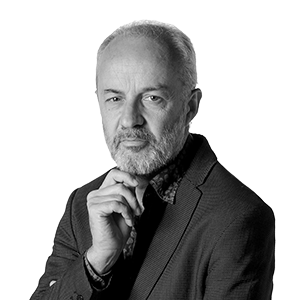 In my personal life, I resent immaculate consistency, predictability, habits which are too regular, even reliability. I like chance, improvisation, being surprised, changing my mind, doubting, contradicting myself, a veil of poetic magic, confusing passion and ideas. I am disturbed by order and foresight, by those who take themselves too seriously, by the lack of irony. In the political sphere, the exact opposite happens to me. I intensely dislike magic, lack of professionalism, heroic epics, improvisation, jokes, sentimentality, ups and downs, sudden changes of script, absurdity. I look for (and cannot find) seriousness, order, credibility, reliability.

It seems to me that the confusion between these two spheres has installed itself between us with a surprising naturalness. Public life has become a grotesque amateur family show, of selfies and homemade proclamations, like a Sunday afternoon diner. And at the same time, private life, deprived of creative sociability, is falling down the slope of the most serious, anodyne and grey boredom. I'm afraid this change of roles is making us lose our temper: politicians', judges', everyone's.

I have long missed a certain political (and judicial) boredom: analyzing detailed budgets and the intentions behind them; making (and interpreting) laws to solve problems, not creating new ones; addressing specific issues affecting businesses and households... No more surprises, please! When will we have public servants who prioritise public service again? After the pitiful spectacle in which we live, in reality there is no confrontation of ideas or almost of strategies, but laziness of thinking and of saying what you think, mental cowardice, not to mention stupid pious lies repeated ad nauseam to the parish of those who are convinced. Thus, of course, we do not get out of the vicious circle of our own impotence.

At home, let everyone do and say what they want. I have already mentioned it: I am not sure if I am coming or going. I don't like straight roads, I prefer to get lost from time to time, to daydream. But in collective affairs, it doesn't work like that. We are many and very different, and we have to understand each other somehow. We have no choice but to put the cards on the table, each his own, and play a game with agreed and lasting rules, thus avoiding that third parties (judges) ruin the game for us. The change of rules must also be agreed upon. This is democracy, parliamentarianism, citizen participation, public-private collaboration, regulated market, etc. Populism, in all its hard or soft versions, global or punitive, is the opposite: it is wanting to be liked, it is making castles in the air, it is promising paradises, not rolling up one's sleeves on a daily basis, letting problems rot, looking for easy culprits, avoiding all self-criticism - the ultimate epic fake. It is, in short, the incoherence that has become the norm: one day I say one thing and the next day the opposite, and I don't care.

Right now nobody knows when the elections will be held. In any case, when they are, I will analyse the candidates according to the degree of boredom and seriousness. The fewer smiles and tears, the more points they will get. The fewer promises, the merrier. The fewer simplifications, the better. Selfies and tweets will subtract points. Clever out-of-the-blue ideas will also be downgraded. Grandiloquent claims will practically disqualify. Goose bumps - emotionality - will plunge the candidates, according to my tired eyes. Politics cannot be a chicken coop. It would have to be something more formal and neat. It is the place where ideals land, and are put into practice, it is the place where talk and compromise are made, the place where a government is made for both friends and enemies. We should go back to this place, if it is still possible.

Ignasi Aragay is the deputy director of the ARA