Is it true that the government is "making a killing" with the rise in petrol prices?

VAT revenue rises, but the main tax is the fuel tax, which is constant regardless of the final price

The escalation in the price of gasoline, which is at an all-time high in Spain, has opened the debate as to whether the Spanish government should lower the taxes it charges on fuel. Electricity taxes were already lowered in September, but fuel taxes were not. The future leader of the PP, Alberto Núñez Feijóo, accused the State of "making a killing" with the rise in prices and employers' association Foment del Treball called on the Treasury to stop making "windfall profits", in an allusion to electricity companies' inflated profits.

Is it true that the State is making a fortune? There are some nuances to be made. The first is to understand what the two taxes on fuel are: one is VAT, which does increase as the price rises. Since VAT applies a surcharge of 21% to the original price, if petrol were worth €1 per litre this tax would be 21 cents. On the other hand, if gasoline is at €1.58 (which is the level it was last month on average), VAT would increase to 28 cents. The Treasury's revenue, therefore, does grow. However, a ministry spokesman warns that, precisely because the price rises, this may cause consumption to fall and, ultimately, VAT revenue may end up falling.

The biggest tax on gasoline is the hydrocarbon tax, which is double the VAT. Specifically, every time we fill up the tank of the car we pay 47 cents per litre (in the case of petrol) or 38 cents (in the case of diesel). But the rate of this tax is fixed. Therefore, the Treasury's revenue does not grow if the price of gasoline rises, but only if citizens and companies put more fuel in the tank.

47 cents per liter
The main tax on gasoline is the tax on hydrocarbons, which is double that of VAT and which remains constant, regardless of the price of fuel

This means that when prices rise, the weight of taxes in the final bill falls, since the main tax remains constant. This can be seen if we look at the data since the beginning of 2021. In January of that year – with petrol at €1.2 – taxes accounted for 56% of the final bill. In contrast, last month – when the price had risen to almost €1.6 – the weight of taxes had fallen to 47%. In the case of diesel, the trend is exactly the same.

Price and taxes on petrol 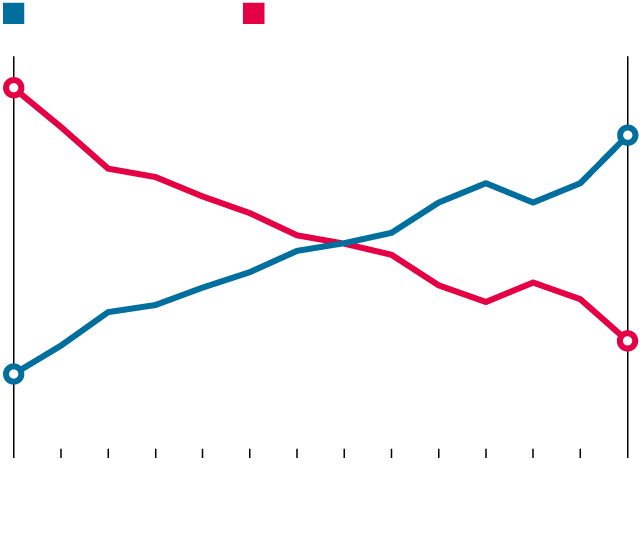 If we look further back, it has always been like this: in January 2016, when the price of petrol was very low (barely by one euro a litre), taxes accounted for 60% of the total, almost two thirds of the bill we pay when we fill up the tank. As can be seen in the following graph, the collection of hydrocarbon tax does not vary according to the price of gasoline and diesel. Its evolution is parallel to that of GDP: when GDP grows, revenues increase; and when the economy falls, so do revenues.

However, Spain's fuel taxes are not particularly high compared to other European countries. If we look at prices across the continent, in Spain last month they were in the middle of the table (€1.58 per litre) and below the European average (€1.77).

However, Spain does rank among the leaders when looking at gasoline prices without taxes. In this case, only Denmark, Germany and the Netherlands have higher prices. Specifically, in Spain the litre was paid at 0.84 euros last month, while the European average was 0.82 euros. And the weight of taxes in the final bill (47.3% in the Spanish case) placed the State in fifth place at the bottom of the entire continent. In short, if the Treasury finally lowers VAT and the price of gasoline does not fall, it would be possible for Spain to be among the countries with the cheapest petrol in Europe.

How expensive are prices in Catalonia?

If we look at the cost of fuel by autonomous communities, Catalonia is in the middle of the table. Last month, for example, petrol cost €1.586 per litre with taxes, far from the €1.661 in the Balearic Islands (the most expensive community) or €1.660 in the Basque Country, Madrid and Asturias (the second, third and fourth most expensive communities, respectively). In the case of diesel, Catalonia was the sixth community from the bottom (€1.469), while the Balearic Islands paid €1.551; the Basque Country, €1.509; and Madrid, €1.498.